It is difficult to say which of these brief cold showers will leave you feeling happier to leap back into the warmth of the everyday. Presented back-to-back in a single volume, both novellas share an unhappy preoccupation: picking apart the threads of the past in order to untangle – or at least understand – the enmeshments the present.

The narrator of Dead Time is Isabella, a teen awaiting trial for a crime which, she repeatedly insists, she did not commit. It was her boyfriend who murdered the interloping Lulu; as soon as he confesses his guilt, Isabella will be released from the grim “youth center” where she awaits trial. Author Christy Ann Conlin deploys the first-person voice masterfully— Isabella’s rage beats palpably from the page, and we are righteously indignant on her behalf. Yet the further she beckons us into her memory, recounting the events antecedent to Lulu’s murder, the uglier and less justifiable her anger becomes. So gradually is the reader’s sympathy eroded that the story’s final twist – though dimly visible all along – still manages to come as a surprise.

Though more straightforward than its companion novel, Jen Sookfong Lee’s Shelter is no less dispiriting in its outcome. We begin at the unhappy end: our narrator, Abby, weeps alone on a park bench. Even before her latest catastrophe, it would seem she has plenty to cry about: maimed by debt, her parents abide in private misery, leaving Abby to run a singularly thankless household. Her only solace is a volunteer job at the local animal shelter, where she meets a beguiling young man named Sean. We know Abby’s infatuation with Sean will end badly, but the form and flavour of this badness is not revealed until Abby fully unspools her dismal yarn. Though hampered by some awkward turns of phrase- “… it feels like he’s always been part of me, like an elbow” - the story succeeds as a meditation on the blurred line between the security of a shelter – be it a house, a family, or a lover — and the confinement of a trap.

Pitched at mature but not necessarily avid readers, Annick Press’s Single Voice Series entices with the promise of gritty, fast-moving narratives packaged in a clever two-for-one reversible format. Both Dead Time and Shelter are certainly gritty and, at less than 100 pages a pop, fast enough to read in one go. It is unclear, however, what the effect on their intended audience might be. Comfortless in their brevity, joyless in their details, these novels do little to stir the imagination or assuage the loneliness of the young reader. At best, they offer a frisson of discomfort, a chilling affirmation of vague adolescent unease: the world is indeed out to get you. 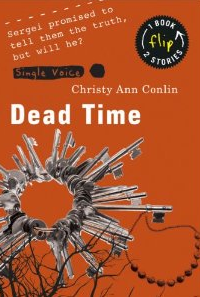