Wildlings Book 1: Under My Skin by C. de Lint

This Young Adult fantasy begins in present day Santa Feliz, California.  The story unfolds through two voices, Josh and Marina, who are best friends.  This school year, each character has become a Wildling, someone who shape shifts from human to animal form. As more and more local teens are becoming Wildlings overnight, government and corporate organizations move in to lock down the situation.  Josh’s quest is to make sure any external interest has good intentions, and Marina’s journey is more about acceptance and making sure that Wildlings are treated with respect.

Both Josh and Marina are caught up in the movement as different factions of Wildlings compete for their attention.  Some come across as eco-warriors, while others explore the spiritual blessing nature of shape shifting and other natural gifts. Every single adult and teen group involved in the Wilding phenomenon has a different agenda, and neither Josh nor Marina can identify where they belong.  Instead, Josh is singled out as a natural leader, as his animal self, the mountain lion, is one of the oldest animal clans known.  Marina’s intentions of aiding the Wildling cause confuse her as she has to choose between the cause and her own dreams.

The alternating voices in each chapter allow the reader to understand the perspectives more deeply. This novel is a familiar story of teens being misunderstood as they go through their quest for identity.  The shape shifter motif allows the author a way to explore questions of identity in sexuality, race and belief. As the shape shifter story is now a popular culture meme, this puts Under My Skin clearly in a fantasy category for beginners.  The book ends as Josh and Marina escape their first test of Wildling experimentation leaving room for the proposed sequel to take place. The story hints briefly at stirrings of sexuality and the violence is dramatic but not overdone. This novel’s realistic and modern setting will appeal to most any reader who is ready to dabble in the fantastic. Readers who are more experienced with the genre may find de Lint’s explanations of fantastical elements to be juvenile.

Alanna King is a Masters student in the Teacher-Librarianship through Distance Learning Program at the University of Alberta. 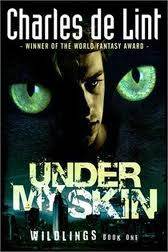