While this is really a picture book with most of the pages filled with Qin Leng’s comic style drawings, it is the story that is important.  The drawings are brightly coloured and appropriately uncluttered to match the story being told.  It is a simple story, but told in language that preschool and early elementary school children will understand.

In traditional Inuit culture, much of a child’s education comes from the elders, often grandparents. Much of the teaching is indirect, through story telling.  Kamik is an example of this form of teaching, both in the way that Jake in the story learns and in the way that we, the readers learn.

Jake is a young boy whose puppy won’t behave.  He is frustrated with him.  He says to his grandfather, “He never listens, no matter how loud I yell.  I called him Kamik because his fur looks like he’s wearing a boot.  I should have called him Bad Dog.”

Jake’s grandfather doesn’t give him advice on how to train his puppy.  Instead he tells him stories about his own dogs.  He describes how Jake’s grandmother “raised them in a similar way to raising a child”.  He says that it was “more like building a good friendship than raising an animal”.  Jake’s grandfather describes how his dogs helped him, saved his life and brought him home through storms.  By the time Jake goes home, his attitude has changed and he decides to follow tradition and rename his dog for one of his grandfather’s great sled dogs.

This is a simple story and young children will hear it as a story of a boy and his dog.  However it contains a complex lesson and reflects traditional Inuit wisdom.  This book is highly recommended for public and elementary school libraries everywhere.  It is also an essential addition to any collection of northern Canadian children’s literature. 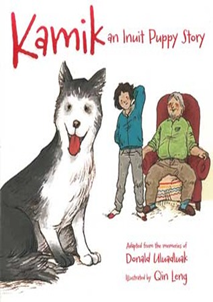