Awake and Dreaming by K. Pearson

Recently published in a new edition by Puffin Classics, Awake and Dreaming feels just as relevant to lonely children as it did when it was first published in 1996. One of Canada’s favourite authors of junior fiction, Pearson’s award-winning tale of a lonely girl, Theo, will wrench at the heartstrings of readers of all ages.

Nine-year-old Theo longs to be part of a large family, with brothers and sisters to play with, living a stable life that does not involve moving from apartment to apartment. Her young mother works long hours for low pay, and is focused on her own problems and wants, neglectful, at times, of Theo’s desire to be cared for. Theo uses books as an escape from her dreary and lonely life, daydreaming during school of the kind of large, caring family she reads about in library books.

Shortly after Theo and her mother move to their new Vancouver neighbourhood, her mother, Rae, runs into an old friend and they begin to date. Soon Theo is shuttled onto a ferry to Victoria to live with an aunt she barely remembers, until Rae and her boyfriend can “get used to living with each other” and she can return to her mother. While on the ferry, Theo meets her perfect idea of a family, and they welcome her into her home. She lives a wonderful, stable life for a few months, before she starts to be ignored again, this time by the only people whom she thought truly cared about her. A sharp return to her old life leaves her feeling miserable and more lonely than ever. Was her dream family just that, a dream? Will she ever find them again? Who was that strange woman staring at her on the ferry? Readers will have to finish the book to discover the startling and intricate tale behind Theo’s unusual circumstances.

Awake and Dreaming is similar in tone to some of Pearson’s other works, which tend to feature lonely and, at times, frightened children, who are forced to confront the harsh realities of the world in which they live. Although this book was published almost twenty years ago, the majority of the content is still relevant and applicable to children growing up across Canada  today. Though the magic in the plot twist is dubious even for those die-hard believers in magic, the message of hope and of Theo’s desperation to belong to her peer group are strongly enforced throughout the novel. A new introduction written by Kenneth Oppel, as well as a character list, author profile, and discussion questions are included in this edition, making it a useful addition to classrooms, libraries, and book clubs.

Carlene Slobodian is an MLIS candidate at the University of Alberta with a lifelong passion for children’s literature. When not devouring books, she can be found knitting, cooking, or discovering new kinds of tea to sample. 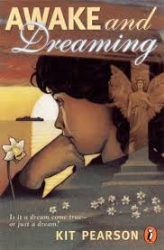