What Can You Do with Only One Shoe: Reuse, Recycle, Reinvent by S. & S. Shapiro

Shapiro, Simon and Sheryl Shapiro. What Can You Do with Only One Shoe: Reuse, Recycle, Reinvent. Illus. Francis Black. Toronto: Annick Press, 2014. Print.

The publisher is promoting this charmingly-illustrated book as one intended to inspire a practical and constructive response to the environmental concerns with which we all must grapple. It is a theme which is oddly underrepresented in children’s books, perhaps because it is difficult to craft an approach which is empowering.

This book considers popular contemporary ideas about recycling/repurposing everyday objects which have outlived their initial purpose, but it is not the do-it-yourself handbook that it appears to be. Instead, it is a collection of juvenile short poems with a humorously entertaining tone, but no clear message. Clearly, we should not judge this book by its title or by its covers. One poem makes fun of a toilet-turned-into-a-planter and offered as a gift, while another offers a range of silly suggested uses for a single shoe, including flattening pancakes. There is a poem which describes a tractor pulling a “broom propeller” for street sweeping which doesn’t work very well (“pebbles flying left and right”) and another in which a dog made of bicycle parts is less than satisfying (“he can’t lick my nose”). There are some poems with a less mocking tone, but which offer suggestions that are even more absurd, such as children making musical instruments from rusty cans retrieved from a landfill site or children building their own playground, complete with a swing and a slide, from an old ambulance. Intended for children aged 5-8 years old, I wonder what young readers would make of these poems.

The illustrations by Francis Blake are by far the best feature of this book. Going well beyond what is found in the poems, the illustrator has created a marvelous cast of characters that are expressive in a way that is both quirky and charming. While the illustrations deserve four stars out of four, the text certainly does not.

Not recommended: 1 star out of 4
Reviewer: Linda Quirk

Linda taught courses in Multicultural Canadian Literature, Women's Writing, and Children's Literature at Queen's University (Kingston) and at Seneca College (Toronto) before moving to Edmonton to become the Assistant Special Collections Librarian at the Bruce Peel Special Collections Library at the University of Alberta.  Her favourite children's book to teach is Hana's Suitcase, not only because Hana's story is so compelling, but because the format of this non-fiction book teaches students of all ages about historical investigation and reveals that it is possible to recover the stories of those who have been forgotten by history. 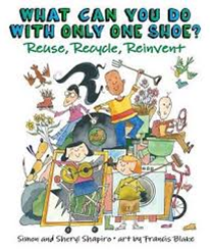