Rose Under Fire by E. Wein

Rose Under Fire is a companion novel to Wein’s bestseller, Code Name Verity. Readers of the first book will be delighted to see the return of some of the characters, including Maddie and Jamie.

Rose, a nineteen-year-old pilot fresh from America, joins the Women’s Air Transport Auxiliary in England, shuttling planes to dropoff points for pilots who carry out secret missions in the late summer of 1944. She is on her way back to England from one of these missions to France, when a combination of poor decisions and bad timing leads to her capture by a German pilot. She is sent to Ravensbruck, a women’s concentration camp, where she discovers the shocking and horrifying realities of day-to-day living in cramped and horrifying conditions. With the Germans losing ground almost daily as the war draws to a close, more and more women are brought to this camp in an attempt by the Nazis to reduce the horrific appearances of other, larger camps, such as Auschwitz. Rose and her new friends attempt to use the newfound chaos to their advantage in order to escape the daily executions.

The novel is written mainly in the first person in the form of a diary, both before and after Rose’s time in Ravensbruck. The tone seems at times detached and distant, which could be an attempt to show the psychological trauma Rose experienced as a result of her time in Ravensbruck. The change in Rose’s tone goes from that of a naive and hopeful girl at the beginning of the book, to a matter-of-fact and depressed young woman in the middle, to the one of renewed hope and purpose that is found at the end of the narrative. The perspective of a female pilot who is initially unfamiliar with the plight of the camp prisoner is a welcome addition to many other voices explored in the dearth of young adult literature written on this topic.

Due to the dark setting of this novel, it is a much more difficult read than its companion, Code Name Verity. The living conditions of the women in this novel are closely based on real-life accounts of Ravensbruck survivors’ testimony, found both in written memoirs as well as recorded evidence against the Nazis during the Nuremberg Trials. Sometimes it is helpful to take a break in the middle of a particularly dark scene in order to collect one’s thoughts and emotions before continuing with the reading. However, the detailed descriptions only further condemn the atrocities that so many endured (and more often perished from) during World War II.

Carlene Slobodian is an MLIS candidate at the University of Alberta with a lifelong passion for children’s literature. When not devouring books, she can be found knitting, cooking, or discovering new kinds of tea to sample. 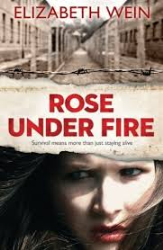