This ABC book has an insouciant air; it completely avoids the “A is for Apple” format.  Generally, alphabet books highlight the capitalized (and, sometimes, lower case) forms of each alphabet letter, illustrating their sounds with familiar nouns. Not so, White’s picture book.

White fastens on any part of speech she pleases to illustrate the sounds of the letters.  Sometimes she creates considerable “phonic resonance:”

C  In February we catch colds and can’t go out to play.

Sometimes, not so much:

U  We make cozy campfires and eat under the stars.

The words italicized in this review are not italicized in the original text; they are printed in a deeper tone of ink than the rest of the sentence.  The technique is not wholly successful.  In lamplight, for example, the degree of contrast is much diminished, particularly where the printer has used sepia toned or purple inks.  (Colour-blind children might have great difficulty in seeing any contrast whatsoever.)

Set against these difficulties are White’s enchanting illustrations.  Her “critters” represent various eras and classes of fauna.  Furry mammals, birds, and at least one heart stealing triceratops caper through the seasons.  They are seen not only catching colds in February, but also planting in April, picnicking in July, raking leaves in September and flooding rinks in December.  Through the medium of watercolour, White creates images that are delicate and detailed, inviting the preschool child to linger and to imagine.  All in all, this is a beautiful and calming bedtime story — best read in good light. 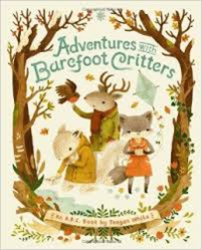