Malala’s name and story have much contemporary resonance.  The Taliban’s attempted assassination of her in October of 2012 was instantly conveyed around the globe by the international media.  This Pakistani school girl, who was outspoken on the issue of female education, had been shot while riding innocently home on a school bus.  Flown to England, she was hospitalized, underwent surgery, fought for life and survived.  With recovery came renewed defiance of her would be assassins.  Malala continued to speak out in her cause — most notably at the United Nations Youth Assembly on July 12, 2013 where she riveted the attention not only of the 1000 delegates present, but also of the entire listening world. The Secretary General of the United Nations proclaimed that day to be “Malala Day.”

The premise of McCarney’s book is that every day is “Malala Day” for some little girl, somewhere.  Plan International has contributed sensitive photographs from around the world attesting to McCarney’s theme: Malala’s courage and determination are a beacon of hope, a source of inspiration.

This book details a piece of history not to be forgotten.  Buy it.  Buy it for your libraries and classrooms.  Buy it for the children you love — and their children.  Buy it for that bright and future day when all children, regardless of gender, have the opportunity to be educated, and a complacent world asks, “Was it not always thus?” 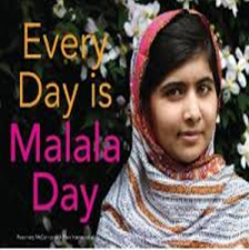