From Lands of the Night by T. Mollel

In this work, a well-known author and storyteller, Tololwa Mollel, has drawn upon the folk customs of East Africa to illustrate how one family deals with critical illness.  The tale is set in contemporary times and is told through the eyes of a child. Briefly, a feverish baby seems beyond the help of standard medical practice and, thus, his parents turn to a traditional healer for help. Under the healer’s guidance, they invite friends, neighbours and relatives to a “joyful celebration.”  The healer summons guests from lands of the night: ancestors, angels, and even Mola, who is God.  There follows a night of feasting, singing and dancing.  Darrell McCalla’s watercolors brilliantly convey the otherworldliness of the occasion.  The baby revives.

Mollel’s text is well written for reading aloud or telling: in fact, anyone who has ever heard him perform will sense his voice engaging the listener throughout the story.

In an author’s note, Mollel tells us of his intention to marry the traditional with the contemporary in writing of his native Tanzania.  In doing so, he bridges the distance between the real and the imaginary world very subtly.  No rabbit hole, no magic wardrobe, no melting railway station wall signals that we have entered a place where faith and magic are freely at work.  It is left to the reader to suspend disbelief – or not -- respecting the baby’s recovery.

Who then, will suspend disbelief?  Young children who move effortlessly between the worlds of reality and magic will clearly accept and welcome the arrival of helpers from lands of the night.  Many adults will be skeptical about the efficacy of the “joyful celebration;” nonetheless, they will be fascinated with the tradition that Mollel has here revealed.

But the book may be troubling to some.  We cannot ignore the current climate in which it has been published.  In recent months, news of the incremental spread of the Ebola virus in West Africa has dominated the news. The World Health Organization declared this epidemic to be the most serious global health concern of our times. Those countries outside of Africa to which the virus has been carried entered “red alert” mode, and certain segments of their populations panicked.  In the context of these realities, librarians might want to be prepared for the patron who storms in waving the book and demanding, “Why are you advocating miracle cures as a way of dealing with plague?”  There are plenty of good responses: have them at the ready. 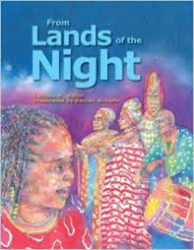