Originally published in a larger format in 1986, 50 Below Zero has been republished as a board book.  The story is a northern and cold climate one, created while Munsch was making a book tour stop in Watson Lake in the Yukon Territory.  However, while the setting is cold, the story is really about sleepwalking.

The text of the board book is much abbreviated from the original.  Much of the repetition, for example Jason’s “What’s that? What’s that? What’s that?” and the father’s running three times around something whenever he is wakened have been removed, as well as a segment where Jason finds his father in the bathtub.    However, the story still contains enough repetition to amuse the intended audience of 2 to 5 year-olds.

Like many of Munsch’s books, the story presents a child who takes control of a problem and solves it.  Jason repeatedly gets up to find his father in a new location to which he has sleep walked.  Most importantly, he locates him out in the forest when it is “50 Below Zero”, asleep against a tree.  Had Jason not found him and brought him back to warm up in the bathtub, he surely would have died.   So Jason saves the day and even figures out how to keep his father out of danger while sleepwalking.

Most of Michael Martchenko’s illustrations are in an icy blue, reflecting the cold winter landscape.  All of the images are fun and will elicit a smile from both child and adult readers.

This book has stood the test of time and does well in the board book format.  It would be a good addition to school libraries, public libraries and libraries with polar children’s collections. 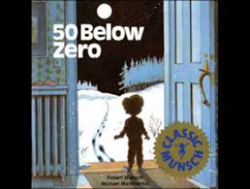