As this story opens, the proprietor of the Magical Animal Adoption Agency, Mr. Jams, has only recently returned from a journey, bringing with him a large, mysterious, and enchanted egg.  Suddenly, he is off and away to consult with an expert on the potential nature of the egg’s unknown inhabitant.  Clover, our young heroine, is left in charge of the entire Agency and its assemblage of fire salamanders, fairy horses, bewitched kittens, unicorns, and, of course, the incubating egg.  Within a day of Mr. Jams’ departure, the egg hatches, unseen, and its occupant is nowhere to be found.

Children will be fascinated with the detail, the drama, and the sheer unbounded imaginativeness of the world that Kallie George unfolds.  They will be engaged as well with Alexandra Boiger’s black and white drawings which enhance, but do not totally define the text, leaving much to the imagination.  Finally, they will relate to Clover, an ordinary little girl with extraordinary staying power.

For the most part, George’s literary style is typified by imaginative vocabulary, varied sentence structure and good pacing.  That being said, her writing contains some weaknesses which seem to arise in the context of colloquial usage.  One example will suffice. Though dialogue is a reasonable place in which to insert a colloquialism, grammar teachers of the world will be pained by this one, “You must like animals as much as me,” said Clover.

Though she has problems with spelling, Clover is, nonetheless, a remarkably clear thinker.  She is also well-spoken.  It would not be too much out of character for her to say, “You must like animals as much as I do.”  (Dare we then to hope that her devoted readership would emulate this speech pattern?  Probably not—but it’s worth a try!)

If this observation seems quibbling, it stems from a noble conviction: childhood is so brief a time that what we read in its few and formative years should be the best it can be.

Quibbles aside, this book would be suitable for and appealing to independent readers in the elementary grades.  Primary school children would be avid listeners.  All will be borne away on the magical tide of the story.

Leslie Aitken’s long career in librarianship involved selection of children’s literature for school, public, special and academic libraries.  She was formerly Curriculum Librarian for the University of Alberta. 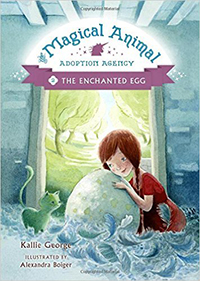