If public health seems like it would be one of those topics that would send you to sleep, then Bubonic Plague: When Plague Invaded America by Gail Jarrow will change your mind. This is the final book in her trilogy about Deadly Diseases for middle grades and higher.

Jarrow is fairly succinct in presenting the history, transmission, and trajectory of various waves of plague around the world.  She briefly charts its first appearance in 541 in Turkey, then vividly describes the second wave that started in 1346 and at its most virulent was named the Black Death, killing millions in Europe and parts of Asia and North Africa. The majority of the book focuses on the third wave, when it reached North America.

The third pandemic began in the mid-1800s when China became ground zero for this next wave, which spread to Hong Kong by 1894. Hong Kong was a busy port town and trade and travel on steamships allowed for rapid dispersion of the disease. Researchers from a number of countries sought feverishly to identify the source of the epidemic and learn how it was spread. By the late 1890s two of them had proven it was rat fleas. Unfortunately almost nobody believed them, which became problematic when in 1900 San Francisco saw its first deaths in Chinatown.

Jarrow provides a fascinating look at the political and social climate of this period in relation to the attitudes of Americans towards Chinese immigrants and the impact quarantining San Francisco’s Chinatown would have on businesses reliant on trade and tourism. It became a complicated and fraught tug-o-war between politicians, businessmen, doctors and public health officials, fighting about whether to recognize and publicize the deaths and quarantine when the evidence seemed inconclusive as to their cause. Even after proof was offered action was surprisingly slow to follow and the disease was able to spread, although the number of deaths was comparatively low, being in the low hundreds.

This well researched book also includes information about contemporary cases in the United States, ongoing research and treatments for all three strains of plague.  There are extensive source notes and bibliography, a glossary, timeline, index and an author’s note explaining her keen interest in public health and the importance it had in the past,

and will have when the next global pandemic hits. Also included are numerous photographs (some a little gruesome), newspaper clippings, cartoons, posters and illustrations to engage readers’ interest.

This will pair perfectly with a middle grade novel, Chasing Secrets by Gennifer Choldenko, 2015 that gives a fictional account of the outbreak in San Francisco.

This is a strong finish to a fascinating series that combines history, social issues, scientific research, technological developments and culture in America, showing long term implications for today’s government policies towards health.

Tammy is the Reference Coordinator in the Doucette Library of Teaching Resources at the University of Calgary. She also reviews juvenile resources with an eye to classroom use in her blog, Apples with Many Seeds. 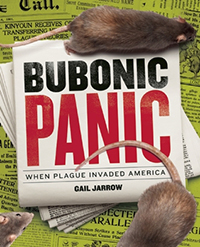