When Santa Was a Baby by L. Bailey

Bailey, Linda.  When Santa Was a Baby, illustrated by Geneviève Godbout.  Tundra Books, 2015.

Linda Bailey draws heavily on Clement C. Moore’s  The Night Before Christmas in creating this portrait of the child Santa Claus.  As an infant, his dimples are “merry;” his nose, “Like a cherry.” His baby voice booms “Ho! Ho! Ho!” and his preferred color is red.  As a young child, he hitches eight baby hamsters to a matchbox sled and begins to name his chargers: “ Dasher…Dancer…Comet…Vixen.” By the time he develops an interest in chimneys, and sullies his clothing with ashes and soot, we are beginning to feel that the literary allusions are a bit forced. To be fair, young readers and listeners who have heard the recitation of Moore’s classic not nearly so often as has this reviewer might find the allusions quite provocative and amusing.

Bailey does attempt to convey the spirit of St. Nicholas, the legendary fourth-century Bishop of Myra, with whom, we believe, many stories of generous and anonymous gift giving began.  We know that over the course of the centuries, the idea of a gift-giving saint gave rise to such figures as “Sinterklaas” in the Netherlands, “Father Christmas” in the British Isles, and “Santa Claus” in North America.  Bailey’s assertion that the young Santa was a child who gave his presents away is certainly in keeping with the spirit of the original saint.  Her suggestion, however, that he preferred frigid surroundings, hence, settled at the North Pole, does not square so easily with what we know of a bishop who lived on a Mediterranean shore where the legends of his charitable acts arose.  None-the-less, if Moore could use artistic license in his vision of Santa Claus, so can Bailey.

The illustrations of Geneviève Godbout are a lively accompaniment to this tale.  Godbout’s experience as a film animator are evident in her ability to produce facial expressions with strong, simple lines, good color contrast between background and foreground figures, and excellent focal points even in fairly detailed illustrations.  These features make her work a good choice for use in classroom or library story hours.

In sum, the storyline of When Santa Was a Baby is very dependent upon The Night Before Christmas and would succeed best with (and seem most humorous to) children who are familiar with that classic verse.   Fortunately, the many reprintings, picture book interpretations and performances of Moore’s work are widely available. Teachers, parents and librarians should have no trouble laying the groundwork for an appreciation of Bailey’s picture book. 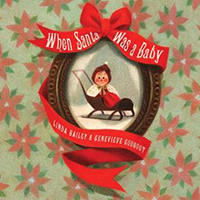