As A Boy by Plan International

Plan International is a charity that attempts to end world poverty.  It also raises humanitarian concerns through its publications; this one is, seemingly, for children.  In it, both gender roles and educational expectations in impoverished countries are explored.  Vivid and realistic photographs accompany the text.

Preceded by the statement, “…I will be told…to fight, to be brave,” we see a photograph of a boy with a crude toy rifle perched on his shoulder.  The image evokes the child soldier.  In further photographs, we see both genders at work: boys dragging huge bundles of sticks across the floor of a primitive factory; girls hauling smaller but similar bundles on their backs.  Clearly, all of these children are disadvantaged.

Having depicted this reality, As A Boy then launches its primary message: because they have the privilege of schooling, boys are luckier than girls.  Boys, therefore, must stand up for the right of girls to learn. The message raises a significant question: who is the intended reader?

The text could easily be handled by a child reading at the grade two or three level but, surely, one does not enjoin a seven or eight year old child to “stand up” for everyone’s right to an education in defiance of a cultural norm that is centuries old.  To whom can a child safely show his defiance?  His father? His teacher? The school board? The religious authorities of his community?

Clearly, the fight for gender equality has to be led by enlightened adults.  They might well be fathers, teachers, religious leaders, and brave, determined women.  Most significantly, the leaders must be “insiders,” members of the very community that is struggling toward change.  Certainly, in the hands of such “insiders,” As A Boy could be an effective communication tool.  Presented by “outsiders,” however, its appeal to little boys to take a stand against tradition could be deeply resented, even seen as an attempt to lead a “Children’s Crusade.”

Recommended with Reservations: 2 out of 4 stars
Reviewer:  Leslie Aitken

Leslie Aitken’s long career in librarianship involved selection of children’s literature for school, public, special, and university libraries.  She is a former Curriculum Librarian for the University of Alberta.

Leslie Aitken’s long career in librarianship involved selection of children’s literature for school, public, special, and university libraries.  She is a former Curriculum Librarian for the University of Alberta. 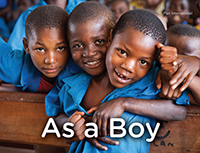