In this work, Maclear uses allegorical techniques to expand on compelling themes.  Her protagonist is unnamed; he is “the boy,” every boy who loves to read.  The Good Little Book is every book that captivates a reader.  Its author is unnamed.   Its characters are not delineated.  Only a captioned illustration, one of Arbona’s many colorful offerings, provides clues to the book’s plot and impact:

“It carried him to the deep sea and steered him towards a faraway land. It dazzled him and stumped him and made him laugh and gasp.  He read it through.  Then he turned back to the beginning and read it again.”[pp.11-12]

Humour is a feature of the work; Maclear likes to play with words--literary words. The Good Little Book resides with others, one of which has won the “Called a Cat” medal.  We are informed, however, that “The good little book…had no shiny medals…it didn’t even own a proper jacket.” [p.3]

The protagonist’s compulsion to read and reread his good little book introduces the first theme: books transport us to imagined worlds.  When the book is lost, then rediscovered, a secondary theme emerges: books are to be shared.

Text and illustration lead the reader to surmise that “the boy” is school-aged, a child physically mature enough to walk his dog while riding a skateboard.  He is, of course, an avid and independent reader.  Tormented by the loss of his book, he is old enough to hunt for it on his own, to scour crowded and heavily trafficked streets, to search the public library.  Initially, he appears to have an age appropriate appreciation of the book’s capacity to occupy his mind, to move his thoughts.

“The book the boy thought couldn’t do anything did many things.” [p.11] “It did become a loyal companion, there to see him to sleep and distract him when he had to “think things over.””[p.13].

To this point, the boy’s relationship with the book seems in keeping with the primary theme: book as intellectual transport.  Suddenly, his thought processes revert to those of a much younger child.

“The boy worried. How would such a good and quiet book survive?  What would it do if it found itself at the edge of the unknown? Or among frightful enemies?...the book did not have skills that would help it in the dangerous wild….”[pp.19-20 ]

The story becomes even more anthropomorphic when the book is discovered by various creatures:

These developments raise a question: “Who is the intended reader?”  A child who has completed grade three would generally have both the ability and the maturity to read the book and to appreciate its messages.  This reader might, initially, identify with the protagonist’s dilemma. But would this same youngster identify with thinking that becomes, in the lexicon of child psychologists, animistic?  One can readily imagine a nine-year-old reader’s sudden dismissal of the work as, “…a little kid’s book.” One can also imagine that a preschooler would listen with rapt attention to the anthropomorphic sections, but zone out during the development of the book’s themes. Finally, it may be that only librarians, booksellers, and children’s literature specialists would appreciate the humour.  In sum, maintaining a clear vision of the intended reader or listener is a requisite in any kind of storytelling; The Good Little Book falls short in this regard. 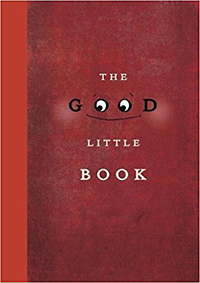