We’re All Wonders by R. Palacio

This is one of several picture books which R.J. Palacio has spun off her bestselling novel, Wonder, which introduced Auggie, a boy missing his left eye. There are few picture books about children with facial deformities, so this is a welcome addition. In condensing the novel into a picture book, however, much of the positive content has been lost. This is a sad story. Auggie is not accepted by other children. When he feels sad he puts helmets on his dog and himself to isolate himself from people’s stares. However, a child and dog with helmets are likely to attract as many stares. Auggie’s other coping mechanisms include: an imaginary trip to Pluto, where his “old friends” are one-eyed creatures that look a bit like sheep with tentacles, and wishing that “other people can change the way they see”. Given that there is a long science fiction history of scary one-eyed space aliens and monsters, it seems strange that Palacio would associate her character with them.  Wishing that the world was different does not make it different. We do not see the positive things that were in the novel such as people sticking up for Auggie or his intelligence and achievements.

Palacio’s artwork is bright and easily accessible to small children. Strangely, though, the final image shows only the right half of Auggie’s face, with the earth replacing his eye, while the left half, that is the focus of the whole story, is missing.

This book would be good for classrooms where there are children with physical differences, but it would be important for teachers to add a positive spin to the story.

Recommended:  3 stars out of 4

Sean Borle is a University of Alberta undergraduate student who is an advocate for child health and safety.

Sean Borle is a University of Alberta undergraduate student who is an advocate for child health and safety. 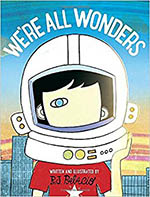