When Children Play: The Story of Right To Play by G. McMurchy-Barber

McMurchy-Barber, Gina.  When Children Play: The Story of Right To Play.  Fitzhenry and Whiteside, 2013.

Right To Play is a humanitarian organization whose beginnings stem from the Winter Olympics held in Lillehammer, Norway in 1994.  While preparing for this event, the Lillehammer Olympic Organizing Committee became concerned that while favoured youth in the developed nations were training for competition, children in Eastern Europe, Asia, and Africa were perishing in war and famine. Their concern led, in 1992, to the Olympic Aid initiative through which Norwegian athletes—Olympians of past years—raised funds for such organizations as the Red Cross and Save the Children. Following the events in Lillehammer, Olympic Aid’s initiatives were carried on in partnership with UNICEF and the World Health Organization. Finally, in 2000, the initiative evolved into Right To Play (RTP). The emblem of this organization is a red soccer ball on which the words “Look After Yourself: Look After One Another,” are emblazoned. RTP’s motto is profound: “When Children Play, the World Wins.”

McMurchy-Barber’s book details the efforts of the “Athlete Ambassadors” who, from the time of RTP’s beginnings to the present day, have championed the right of children to be fed, to be healthy, and to play. These “Ambassadors” have included both elite athletes with world-wide acclaim (e.g., Canadians Wayne Gretzky and Clara Hughes) and local enthusiasts who rise to the cause from the communities being served. Because of its wide based support, RTP is able to distribute not only its red soccer balls (a luxury indeed for children who have nothing with which to play) but also life-saving food supplies and immunization programs. The author details the team-building approaches of the Ambassadors, as well as the hopefulness their participation brings to the lives of the desperate.

It is a joy to read McMurchy’s book. Her writing style finds that wonderful middle ground between grammatical perfection and conversational ease.  She knows to whom she speaks: children in the upper elementary grades. The information she provides, as well as the examples she chooses, would engage the attention of this age group. Credit goes to the RTP organization for providing the realistic and heart-warming photographs accompanying the text.

Highly Recommended: 4 out of 4 stars 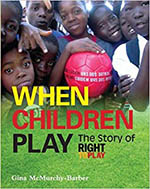