Cary Fagan has created many delightful picture books, among them, Ten Old Men and a Mouse, illustrated by Gary Clement (2007); Mr. Zinger’s Hat, illustrated by Dušan Petričić (2012); and A Cage Went in Search of a Bird, illustrated by Banafsheh Erfanian (2017). In each of these works, the illustrator has brilliantly conveyed the sense of the text.

The storyline of Little Blue Chair would appear to have much potential for robust illustration. Fagan creates the classic circular journey. A little blue chair, outgrown by its initial child owner, is repeatedly given away, used for a time, and given away again. It serves, by turns, as a plant stand, a seat in a wheel house for a sea captain’s daughter, a howdah for children who want elephant rides, a bird feeder in a garden, a seat on a carnival Ferris wheel, and, finally, an air borne craft powered by balloons which carry it back to its original owner. The illustrations, however, are not quite as adventurous as the story.

Whether by the artist’s intent, or the printer’s choice, the colour palette is muted. The choice works well for creating the ambiance of the “junk shop” [p.5], and is, arguably, appropriate for the seascapes [p.7-10], but it seems subdued for the carnival scenes [pp. 21-24].

A further problem arises where the expectations raised by the story are not met by the artwork. Surely some glorious avian display should support the following text:

From all around, birds appeared in the air. Little birds, big birds, plain birds and fancy birds—they all perched on the chair to eat the seeds.” [p.18]

In fact, “the air” and “the chair” are devoid of any birds, and the few tiny ones perched in a tree are barely distinguishable because of the muted colours.

A similar problem occurs in the Ferris wheel scene. Fagan writes: “The man installed the little blue chair. Up, up it went. Round, round it went! The children screamed with pleasure.“

We see just a portion of the Ferris wheel—a few seats, one of which can be discerned as the little blue chair. There are three child passengers; two look vaguely pleased, one seems distracted by her candy floss. We cannot detect a single open mouth that might be indicative of a scream of pleasure.

Young children who are not yet independent readers rely on illustration to convey the action, context and mood of their picture books—thus, the vital need for a “happy marriage” of text and illustration. Little Blue Chair seems to offer just a tentative courtship.

Recommended with Reservations: 2 out of 4 stars
Reviewer: Leslie Aitken

Leslie Aitken’s long career in librarianship included selection of children’s literature for school, public, special and academic libraries. She is a former Curriculum Librarian for the University of Alberta.

Leslie Aitken’s long career in librarianship included selection of children’s literature for school, public, special and academic libraries.  She is a former Curriculum Librarian for the University of Alberta. 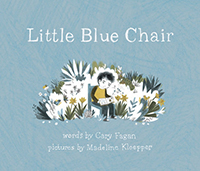