The plot of this amusing picture book is simple: Bill would like someone at the dinner table to pass him the potatoes; he is repeatedly ignored. Bill mutters,

“What am I. Invisible?... PLEASE PASS THE POTATOES!”

In response, Mother continues checking messages on her “whatchamacallit,” and Father answers his “thingamajiggy.” (We have to admire the use of the terms “whatchamacallit” and “thingamajiggy;” Fergus deftly avoids the stale dating that comes with naming current technologies!) The story proceeds: Bill’s brother declares the scientific name for potatoes to be “SOLANUM TUBEROSUM.” His little sister begins to juggle the tubers. No one passes the potatoes. Bill’s fate is sealed; he becomes invisible.

The romp through Bill’s family’s solutions and sorrows as they try to regain their invisible child and brother is complemented by the witty cartoons of Dušan Petričić.  Only a few of these drawings are large and distinct enough to share in a group storytelling session; none-the-less, they would be much appreciated by the individual reader.

That reader might easily be a child of eight years of age—the approximate age of “Bill,” as Petričić depicts him. By the end of grade three, and certainly at the grade four reading level, most children could handle independently such passages as the one below:

Bill was in no mood to eat dinner with his family who had, after all, caused his invisibleness. So he took three peanut-butter-and-pickle sandwiches up to his room and spent the evening with his gerbil, Gerard.

The humour in this story, however, is not for the exclusive delight of the primary school-aged; if you are a “middle child” of any age, you might just think that Maureen Fergus wrote the book with you in mind!

Home, school, and public libraries should find this a popular addition to their collections. Depending on the ages involved, it might also prove a helpful gift for that once-youngest child whose family position has been “reordered” by a newcomer.

Leslie Aitken’s long career in librarianship involved selection of children’s literature for school, public, special and academic libraries. She is a former Curriculum Librarian for the University of Alberta. 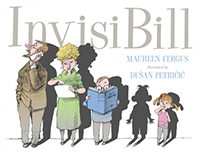