Lila and the Crow by G. Grimard

Gabrielle Grimard is a very successful Quebec illustrator with at least thirty picture books to her credit. Her artistic style is exquisite; forms and figures are outlined with pencil; watercolors and gouache effect a palette both delicate and rich. In Lila and the Crow the illustrations are well focused and well situated on the page. They are also large and clear enough to be effective for group storytelling. There is no overt identification of the setting of this book although Grimard’s depictions of streets lined with birch and oak trees, and peak-roofed, two-storey homes are evocative of Quebec. As well, the caps and sweaters worn by the school children, the yellowing landscape, and the drifting leaves all seem appropriate to autumn in that province. These evocations being noted, the story could occur in any of our provinces.

This is the first book of which Grimard is both author and illustrator. Originally written in French, her work has been simply and charmingly translated by Paula Ayer. The storyline is very realistic, a part of the school playground scene that exists today—and always has—for children who are “the other.” Lila, a little girl who comes to a new school hoping to make new friends, is outcast. Her dark hair, eyes, and skin excite comment. Nathan, a pink-faced, red-headed boy, “leads the pack” of children shouting, “A crow! A crow! The new girl’s hair is dark like a crow!” Lila’s eyes and skin are similarly mocked. The teasing escalates. She tries to hide her hair beneath a cap, her eyes behind dark glasses—but the assault continues. She is shunned. She plays alone at recess, sits alone at lunch.

The mystery of Lila’s appearance unfolds symbolically. Each day, as she walks home from school, a crow keeps watch from an oak tree, wants to approach her, seems “…as if it wants to tell her something…” Finally, at the moment of her greatest despair, Lila “for the first time really looks at the bird.” She experiences “…the strange feeling they have known each other for a long time.” Boldly and creatively, the little girl embraces and celebrates her native heritage, stunning nasty Nathan into silence, and earning the respect and friendship of the other children. “Lila is still called Crow. But she doesn’t mind.”

Grimard’s use of the crow symbol is particularly apt. Corvidae are birds renowned for their intelligence and self-awareness. (They recognize themselves in mirrors.) As well, the birds are widespread across North America and they, along with their larger cousins, the ravens, have symbolic significance for many of our Indigenous peoples. (We should note that Grimard’s dedication of the book references “…the crows of Yellowknife”; Lila’s ancestry may be other than that of the official Crow Nation currently located in Montana, and, at one time, existent in southern Alberta.)

In sum, Lila and the Crow belongs in every elementary school library. In the best case scenario, it would be used in anticipation of the arrival of a child who is markedly different from the “norm” of the school population. At the very least, it might help change attitudes if and when name calling has begun. There is no forseeable end to the cultural and physical diversity of humankind, and acceptance of this diversity is the hallmark of Canadian democracy. Grimard’s book is a wonderful introduction to this concept. 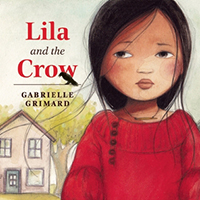