With this team effort, Eldon Yellowhorn, an archeologist and member of the Piikani First Nation, and Kathy Lowinger, a children’s author and former publisher, try, in part, to rectify a situation facing North America’s Indigenous peoples:

“…generations unsure of their culture and disconnected from their identity” (102).

Addressing this issue in ways appropriate for children is challenging; that the authors succeed to such a high degree is remarkable. At the outset, they reveal their strategy: Indigenous cultures can be understood through both myth and science. They explain their methods: historical timelines are established by means of carbon dating, archeological evidence, and documentation. They allow that “writing and paper making were not traditions among the peoples of North America,” but point out that before the arrival of the Spaniards in 1519, the people of Mesoamerica wrote “…thousands and thousands of books…The Spanish invaders burned whole libraries down.”

Because both the geographic scope (the entire continent) and the chronological scope (possibly 19,000 years) of the book are vast, the authors are necessarily selective about the specific cultures they discuss. Their choices give a clear sense of Indigenous intelligence and inventiveness. For example, we learn how the Haida Gwaii built cedar canoes and harvested the sea; how the Plains People of Alberta used buffalo jumps such as the one at Head-Smashed-In to ensure their supply of meat, bone, hide and sinew; and how the Anishinaabe people of the Great Lakes region cultivated wild rice. We also learn how the Olmec people of San Lorenzo, Mexico combined latex from the rubber trees with sap from morning glory plants to create rubber; how the Anasazi of Colorado built “apartment buildings” of sandstone; and the Hohokam of Arizona constructed canals to irrigate corn and cotton crops.

Interspersed with historical evidence realities gleaned from archeological sources, are myths that give a sense of the storytelling voice of each culture. In fact, the title of the book, “Turtle Island” is derived from the “Sky Woman” creation myth of the Haudenosaunee. For the most part, interspersing fact and story works well; however, on page 68 it becomes problematic. Here, an Aztec myth prophesying the arrival of “pale strangers with beards” is immediately followed—without a subheading or page break—by the sentence, “The Arctic is a place that tests anyone who lives there.”  A six-page discussion of the Thule, Inuit, Tuniit, and Vikings ensues. Adults will grasp the connection of the Aztec prophecy to the arrival of the Vikings; children might—because of the juxtaposition of texts—associate the Aztecs themselves with the Arctic. Teacher or parent intervention here may be required.

The book concludes with a discussion of laws, proclamations, wars, and institutions that affected Indigenous lives. Examples include: The Royal Proclamation of 1763 that declared British authority over the “Indian Territories;” the American War of Independence and the subsequent drive westward of settlers; the brutal slaughter at Wounded Knee; and, in both the U.S. and Canada, the residential schools.

Apart from the one flaw mentioned above, the book is nicely designed, colourful, and clearly illustrated. Elementary school students should find it readable, enjoying its combination of myth and fact. In sum, Turtle Island is an excellent choice for both school and public libraries. 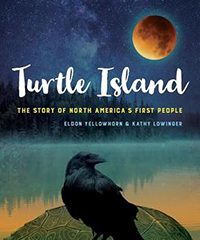