A Boy Asked the Wind by B. Nickel

Not every publication in “picture book” format is written for preschool and primary school children. Barbara Nickel’s poetic conception of the voices of the wind would appeal to a wide range of older students. Her text is based on the scientific realities of the North American Chinook, the Central American Papagayo, the South African Cape Doctor, the Middle Eastern Shamal, and the worldwide zephyr. She writes in free verse, using variation of line length and cadence for emphasis. In stanzas replete with onomatopoeia, with the rush and repetition of words and sounds, she creates the liveliness that ensues when Papagayo meets the Pacific Coast.

In writing of the Shamal as it sweeps through the Tigris and Euphrates river valley, she focuses on the symbols of warfare:

Blinded by dust, the boy could only hear: a blast and clashing swords, a bomb, fist on jaw, and spears clashing

for thousands of years,...

Shamal said, “I’m hit each time they fire through me, the moving air. I hurt, I hear a boy your age crying in fear for his soldier father gone.

Here, the illustrator, Gillian Newland, chooses to reveal the modern reality of the valley: armoured trucks and tanks move through city streets; soldiers with helmets and assault rifles battle in a windswept desert; a helicopter hovers in the dusty skies. The text, of course, alludes to the area’s ancient history as well as its more recent crises. Thus, it becomes the Shamal, the wind that links the past and present. Likewise, throughout the book, the voices of the winds link the artistic visions of author and illustrator.

Newland’s ability to depict any kind of landscape—urban, mountain, prairie, oceanic, or desert is astonishing. Her illustrations feature realistic perspective. Working in watercolour, ink, and pencil, she can create the detail of a human face, or a panoramic view of a night sky—“stars upon stars.” Nothing is beyond her. Each illustrated page is exquisite, a work of art that would engage both children and adults.

In sum, then, this is a book with intellectual, artistic, and literary depth. It demands a considerable level of sophistication on the part of the reader. Certainly, by high school—if not junior high—students should have the requisite intellectual maturity and educational background to appreciate its meaning. An obvious choice for use in a classroom setting, it would be, as well, a beautiful choice for home and public libraries. 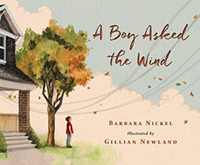