The Big Book of Canada: Exploring the Provinces and Territories by C. Moore

This publication retains the contents and organizational structure of Moore’s 2002 edition of the same title. (It also revisits, reorganizes, and condenses material that he presented in The Story of Canada, Scholastic of Canada, 2016.)

The Big Book of Canada is organized by province and territory, east to west, beginning with Newfoundland and Labrador. Each chapter opens with an illustrated map of the province or territory under discussion; however, nowhere is there an overall map that shows the geographic relationships of the provinces with each other, or with the country as a whole. This could be disorienting for the youngster who does not have immediate access to an atlas or a globe. A further problem exists. Each map occupies one-and-one-half pages at the start of each chapter; for example, the map for Nunavut occupies exactly the same page space as the map for Prince Edward Island.  The young reader who has yet to develop an accurate spatial concept of Canada might easily come away with the false impression that all of the provinces and territories are equal in size. A map, even a pictorial one occupying the end papers, would have greatly improved the educational value of this publication.

Because of The Big Book of Canada’s organization, I read the introduction, then turned to the chapter on Alberta—the province of my birth and my home for seven decades and counting.  There, I found strengths and weaknesses that seemed to be mirrored in the other chapters.

The “Landscapes” section in the Alberta chapter raised some concerns.  Under “Parklands” the text reads as follows, ”…much of this is rich farming country with thick black soils …interspersed with aspen forests on the rolling hills” (157). The wording obscures an important reality: much grey-wooded soil prevails in the rolling hills. Also, because of their elevation, the hills experience a shortened growing season; spring comes late and frost comes early. Rich farms are not omnipresent. (Full disclosure here: my father had a quarter section in those “aspen forests on rolling hills.” We could grow hay crops successfully. We could pasture sheep. Beaver enjoyed the aspen and built a delightful series of dams on the creek that crossed our land diagonally. Sadly, none of these blessings led to our prosperity. We moved to Edmonton.)

Further along, under the heading “Forests,” this statement appears: “In northern Alberta, the Athabaska River and the Peace River drain away to the Arctic Ocean” (157). A map would have clarified other vital components of the waterway’s approach to the Arctic: Lake Athabasca’s delta region, the Slave River, Great Slave Lake, Great Bear Lake, and, of course, the Mackenzie River.

I found great satisfaction in the historical “Moments” section. Events significant in my own lifetime were listed. I noted the signal event in Alberta’s economic history that took place in my early childhood: the striking of oil in Leduc. Toward the end of Ernest Manning’s premiership I became a voter. I watched the changing orientation of my province under the leadership of such premiers as Peter Lougheed, Ralph Klein, and Rachel Notley. Even though Moore did not discuss every premiership throughout these years, I felt that his choice of major events in Alberta’s history was well done. Their significance rang true.

The next section, however, the “Peoples” section, was an enigma. Perhaps because of its title, I expected it to be inclusive. Instead, it comprised a very limited, very arbitrary selection. To mention only the “Blackfoot Confederacy,” “Plains Cree,” and “Nakota (Stoney),” is to acknowledge a mere fraction of the First Nations people who occupy Treaty 6, 7, and 8 lands in Alberta. Acknowledging the “Hutterites” who, for religious reasons, live communally and separately from mainstream society, and noting the “Mormons” who settled at Cardston identifies two interesting aspects of religious practice in Alberta. But why is the larger picture ignored? In Alberta there are many faith communities, some large, some small, some who were persecuted in their countries of origin, some who were not. Each is a part of the fabric of our society. Finally, with regard to the commentary on the “South Asians,” had a broader concept—perhaps “Asian-Pacific Peoples”—been used, then all who have come here from that vast region might have been included; taken together, they currently make up about one eighth of Alberta’s population.

If the purpose of the “Peoples” section were to highlight large minorities, why the utter silence about the Francophone populations of Alberta? If it were to note small but significant minorities, why not mention the Afro-Americans who fled here from the United States? And if it were intended to give a realistic sense of the diversity of the province, why completely exclude the huge proportions of people whose ancestors came from the British Isles, and Eastern or Western Europe?  Finally, even as I write, people are migrating to this province and country from the Middle East, from Africa, Central and South America, and the Caribbean. Is this not worthy of mention?

This book is intended for the school-aged reader who might well ask of its pages, “Where are my people?” Every child in Canada who reads this book has a right to feel included. The territories of our Indigenous people, and the countries from which immigrants came, could be effectively and economically communicated with visuals: maps, graphs, charts, and illustrations. The problem of limited inclusion appears to prevail in the “Peoples” sections of all the provinces and territories. I leave further commentary to other long-time residents of those parts of Canada.

On a positive note, the sections on “The Famous and The Infamous” were hugely interesting. For all that the athletes, musicians, artists, authors, heroes, and villains were subjectively chosen, they were unarguably worthy of inclusion. It was also delightful to come upon entertaining trivia in the midst of all the serious geography and history, biography and sociology. I have not yet tried the “Blueberry Grunt” recipe of the Nova Scotians, but I have already begun to think of a bumblebee in the Newfoundland way as a “dumbledore.”

In sum, though it is perfectly readable, The Big Book of Canada does not present a perfect picture of Canada.

Recommended: 3 out of 4 stars
Reviewers: Leslie Aitken in consultation with Larry LaLiberté

Leslie Aitken’s long career in librarianship involved selection of children’s literature for school, public, special and academic libraries.  She is a former Curriculum Librarian for the University of Alberta.

Larry LaLiberté is the current Geographic Information Systems Librarian of the University of Alberta. 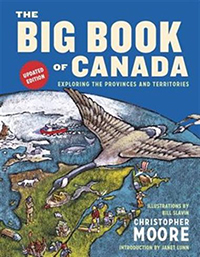