The Mad Wolf’s Daughter is a children’s novel set in thirteenth-century Scotland that tells the story of Drest, a young girl who goes on an adventure to save her father and brothers after they are captured by invading forces. Diane Magras tells an engaging adventure story that sweeps you along with Drest as she tries to navigate a frightening world without her family—learning whom she can and cannot trust, and coming into her own as a young girl who can best adults through both her strength and her intelligence. Written for children, particularly girls of around the same age as Drest (12 years old), this story provides many insights into life, family, and friendship that both children and adults might find extremely powerful. For example, over the course of the story, Drest comes to understand that “you can’t always control your legend”—an important lesson in our modern world where rumour can spread so fast. The story emphasizes that you have to be true to yourself despite what people may be saying around you, and that it is this belief in one’s own self that can guide you through the roughest of times. As details around the lives of Drest’s family and the families of Drest’s friends are revealed in the story, Magras builds another powerful message about how it is ok to differ from and, indeed, disagree with people you love.

Magras, aware that certain aspects of the medieval world in which she places her story may be unfamiliar to her audience, includes a glossary of terms as well as an author’s note that discusses the historical setting in greater detail. In particular, Magras does a good job of indicating that gender roles were not as fixed in the Middle Ages as is often assumed, and introduces the reader to the great variety of roles and indeed agency that women could have in the medieval period.

Despite these positive traits, Magras’ story does seem to lack some depth to its world and only scratches the surface of the medieval context that she researched for the story. However, the exciting plot and vivacious characters satisfactorily carry the novel’s interest. Overall, this is a good adventure book which also offers a point of departure for readers to explore the medieval world in more detail. Therefore, this book would be a good addition to school and public libraries. 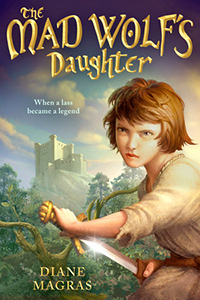