The multi-volume Judy Moody series continues here as Judy attempts to complete a grade three assignment: create a family tree. Learning that one of her British ancestors was “Mudeye” Moody, rescuer of a prisoner from the Tower of London during the reign of Queen Elizabeth I, Judy embellishes: the rescuer was a young prince; the prisoner was a princess; she, herself, is akin to royalty, a future Queen. There is, however, a rival for her title, her schoolmate, Jessica Finch. Jessica, too, has British roots. She, too, claims kinship with Mudeye Moody. Jessica’s Mudeye, however, was a rat catcher who rescued his lady from the Tower in the time of Queen Victoria. Unaware that more than two centuries elapsed between the reigns of Elizabeth I and Queen Victoria, the two girls decide that Mudeye Moody, the one-and-the-same, is their mutual ancestor. They ally; they are “step sisters.” They will keep secret Judy’s relationship to the rat catcher, but, together, they will stage a “Right Royal Tea Party.”

Judy Moody is a domineering child. No constitutional monarch is she; she is a despot, her younger brother the target of her bullying. In both conversational and narrative passages, scatology is the norm. Judy and her friends belong to the “Toad Pee Club.” They meet in the “Toad Pee Tent.” Her younger brother’s Siamese Fighting  Fish is named “Prince Redmond the Farter.” It communicates, of course, by ”farting.” Throughout the book, the young brother is referred to as “Stink.” (There is never any adult censure of this talk.) Dubious diction continues in Judy’s letter to the current Queen Elizabeth. She asks: “...Did you ever ride a hinny? (That’s a cross between a horse and a donkey, not a hiney?) … P.S. Sorry if I’m not supposed to say hiney in a letter to the Queen.” (Among its various uses, “hiney” is slang for “buttocks.” It is, as well, a derogatory 20th-century term for a German soldier.)

It is also curious that the historical dates of Elizabeth I (who died in 1603) and Queen Victoria (who came to the throne in 1837) are never given. There are natural opportunities within the story to do so: Peter Reynold’s illustration of “Famous Women Rulers” is one such opportunity; the Moody family’s trip to Wolff Castle is another. Of course, if Judy and Jessica discover the dates, they must give up their assumptions about Mudeye; he would have to have lived for more than two centuries to perform his dual acts of gallantry. Are the presumed readers (upper primary, lower elementary school children) thought to be too immature to appreciate this absurdity? Or must they be kept in ignorance lest the contrivance of the plot be revealed?

In Canada, school children are taught that the Queen is a constitutional monarch, a symbol of national unity, not a ruler. Because she lives in England, she has a Canadian representative who performs her ceremonial duties. A Canadian Judy Moody might dream differently—perhaps pretending that she is an astronaut like Governor General Julie Payette.

While much imagination went into the premise of this book, it lacks thoughtful, well considered composition.  However popular the Judy Moody books, this entry in the series is weak.

Not recommended: 1 out of 4 stars
Reviewer: Leslie Aitken 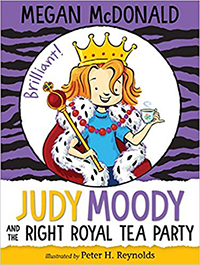