We Don’t Eat Our Classmates by R. Higgins

This is a messy book. Ryan Higgins' drawings are much messier and less precise than his earlier books about Bruce, the bear. However, when you are Pamela Rex, a Tyrannosaurus rex starting school with a room full of delicious human classmates, things get messy, particularly when you have to spit them out.

Ryan Higgins taps the absurd in both his images and text to keep children laughing. Penelope still wants to eat the children, even though her father “packed her a lunch of three hundred tuna sandwiches." There is also an image of Penelope trying to “make friends at recess,” but she is standing at the bottom of the playground slide with her mouth open. Penelope does eventually learn a small lesson in empathy when Walter, the class goldfish, bites her.

Higgins draws Penelope as a stuffed toy Tyrannosaurus rex, perhaps to prevent children from being frightened. The children are represented by the usual politically correct collection of stereotypes, often identified by clothing. There is one Jewish (yarmulke), one Muslim (hijab), two black (tight curly hair), one Indigenous (braids), one Japanese (the only child with a shirt and tie), and several generic “brown” children.  All of the children have dark hair. Blue-eyed blonds are conspicuous by their absence.

In addition to being a fun book, this volume allows every child to claim the moral high ground. Every child can say, “I wouldn’t ever do that!”, because all children know that “we don’t eat our classmates.”

While this is a book about being different, clashes of values, and learning to get along, it is mainly a book that will amuse children. Recommended for elementary school and public libraries. 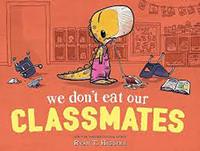