That’s Not Hockey! by A. Poulin

This picture book tells the story of the famous hockey player, Jacques Plante, who loved hockey as a child, but had to improvise because he did not have a lot of hockey gear. The title phrase “That’s Not Hockey” appears when Jacques uses a ball because he didn’t have a puck, uses a tree root for a goalie stick and has goalie pads made out of potato sacks and wooden slats. Andrée Poulin uses the bold-face phrase, “Hey, that’s not hockey” throughout the book, as though it had been shouted at the young Plante to indicate that people were not happy with his changes to the game. This foreshadows the reaction to one of Plante’s greatest and most memorable contributions to the game—the introduction of the goalie mask. While Plante initially faced booing, teasing, and taunting from “reporters, players, goaltenders and crowds”, helmets and facemasks became standard equipment in hockey and players now have far fewer head and face injuries as a result.

This is a good story about a Canadian hockey legend that also carries a lesson about continuing to work at making things better, even when most people seem to be against you. 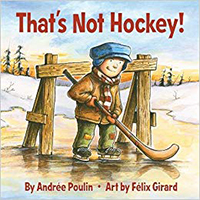