Who Do I Want To Become? by R. Billan

Billan, Rumeet. Who Do I Want To Become?  Illustrated by Michelle Clement. Page Two Books, 2018.

This picture book conveys an important approach to problem solving. When asked by his teacher, Mr. Janzen, “What do you want to be when you grow up?” the central character, Dylan, initially thinks in narrow terms: career choices. He is stymied. When he reframes the question as “Who do I want to become?” he arrives at a thoughtful answer.

Dylan clearly has changed the problem from “What do I want to do for a living?” to “What kind of person do I want to be?” It should be pointed out that the actual words of his reframing are no guarantee of a philosophical result. Many children would still respond to the question, “Who do I want to become?” in terms of role models, generic or specific: “I want to become Prime Minister.” “Chris Hadfield.” “Tessa Virtue.” (Certainly, had I been asked that question at eight years of age as I struggled, in my brother’s old hockey skates, to navigate the frozen puddle that was our “rink” I would have replied, “Barbara Ann Scott.”)

The culminating focus of the storyline is character development; parents and teachers could use this book to begin discussion of it. They may have to do some prompting, even a little rewording of the central question, to achieve that focus. It is worth the effort. Dillan’s answer opens up issues of self-acceptance, self-direction, and self-actualization in a manner suitable for school aged children. His conclusion also emphasizes that the business of childhood is personal growth and development, not career planning. Though this is a picture book, the inherent nature of its topic, as well as Billan’s writing vocabulary, suggest its use with children eight to twelve years of age. Michelle Clement’s humorous cartoon-style drawings should appeal to that age group as well.  In sum, the total package seems age appropriate for pre-adolescent youngsters. 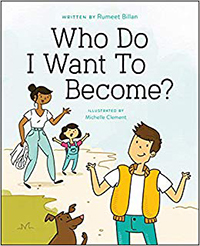