Una Huna?: What Is This? by S. Aglukark

Aglukark, Susan. Una Huna?: What Is This? Illustrated by Amanda Sandland and Danny Christopher, Inhabit Media, 2018.

Juno-award-winning Inuk singer-songwriter Susan Aglukark has had tremendous success blending languages (Inuktitut and English) to tell the stories of her people through popular music. She has now published the first in a planned series of six picture books intended for both Inuit and non-Inuit readers, a series that celebrates the resilience of the Inuit people. The series focuses on a period of tremendous change, beginning late in the nineteenth century, when more and more European traders began to regularly visit Inuit camps. This changing world is seen through the eyes of a young Inuk girl named Ukpik.

Ukpik is a happy little girl who is excitedly seeking the perfect name for her new puppy. A precocious child, she is eager to try new things, to ask questions, and to share newfound knowledge with the other children in camp. She is eager to understand and embrace the European tools for which her family trades—in this story, it is cutlery (knives, forks, and spoons)—but she wonders if these objects will forever change their happy way of life. Ukpik’s grandmother offers reassurance and helps the little girl to thoughtfully consider her family’s place in a rapidly changing world.

As she has done so successfully with her music, Aglukark has peppered Una Huna? with Inuktitut words that will introduce young readers to Inuit culture without confusing them or significantly slowing the pace of the story. The charming illustrations by Amanda Sandland and Danny Christopher are very suitable for children and lend a fairly realistic sense of place. Appropriately, this book was published by the first independent publishing company in Nunavut; Inuit-owned Inhabit Media seeks to promote and preserve Inuit mythology and traditional knowledge. Una Huna? is highly recommended for readers aged 5 to 7.

Linda taught courses in Canadian Literature, Women's Writing, and Children's Literature at Queen's University (Kingston) and at Seneca College (Toronto) before moving to Edmonton to become a librarian at University of Alberta’s Bruce Peel Special Collections. 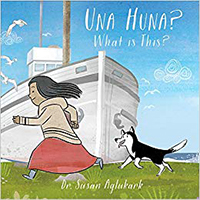