The Funeral by M. James

The Funeral, written by Matt James, focuses on a day that Norma goes to her Uncle Frank’s funeral. While this book will appeal to children, it is also good for adults to look at something heavy in life, such as a funeral, through a child’s eye.

In a relaxed tone and cozy painting style, the story starts with Norma finding out that she won’t have to go to school on the day of her uncle’s funeral. She is excited about the day off and the “plan” of the day, playing with her cousin. Throughout the funeral, the story is developed through Norma’s eyes, showing how she experiences the time with her cousin. Before Norma leaves the funeral, she thinks Uncle Frank would have loved his funeral, since she noticed he was smiling right at her in his photo.

Instead of a heavy, didactic teaching of the meaning of death, Matt explores a delicate way to describe a funeral from a child’s perspective. For example:

There was a little flag [which said FUNERAL] on the car that drove them to the church. Norma tried to sound out the word printed on it.
“F-U-N,” she said.
And then she said it again.

Matt James, a Canadian artist, is an illustrator of many picture books. With this picture book, James debuts as a writer and illustrator. The illustrations of the book are mostly acrylic and ink on masonite. Also, this book is the first time he combined a few digital pieces on the background illustrations. This book would tie in perfectly to a classroom talk about funerals and similar occasions and illustrates what a funeral is like from a child’s perspective.

Yina Liu is a first year PhD student in Language and Literacy, in the department of Elementary Education. Her research interests are digital literacies and children's literature, especially digital picture books. She finished her Master's degree at the University of Saskatchewan and worked in a preschool classroom as an early childhood educator for a year in Saskatchewan. 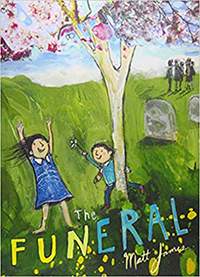