Curiosity: The Story of a Mars Rover by M. Motum

Curiosity: The Story of a Mars Rover, written and illustrated by Markus Motum, would be a welcome addition to any classroom’s library. With exceptional pacing and flow, Motum takes us through the true story of one of science’s great achievements: successfully landing a rover on Mars.

Many young readers have an inherent interest in outer space and science fiction. In this book, Motum expounds the science of science fiction in detailing the story of how Curiosity ended up on Mars (where it still roves today) in a somewhat narrative form. It would be appropriate for all grade levels, though younger grade students would likely need experienced help in order to read it. The font size and colour vary making them readable to most audiences, and they serve the story well.

The story is told from the point of view of the rover itself, named Curiosity. It begins by introducing itself as if it were a sentient creature before it goes back to the beginning, in a very cosmic sense, to plant its story within the wider view of space exploration in general. Motum’s choice in this case allows the reader to gain greater perspective for Curiosity’s story. Curiosity itself is as developed as it needs to be for the purposes of the narrative; that is to say, Motum does not imbue the rover with emotion or opinions within the story. However, the emotions and opinions of the astronauts, scientists and engineers who are namelessly featured throughout the story are indeed explored, which gives a sense of urgency and peril as we travel alongside Curiosity on its adventure.

In addition to authoring this picture book, Motum also illustrates it in a mixed media style that is both alien and historic. The solid colours and painted portions evoke the artistic style of old postcards from days gone by, while simultaneously making the Martian landscape seem exotic and alien, as if Mars were a travel destination, welcoming travellers like Curiosity. Though beautiful, the illustrations do not add much information to the story of Curiosity; in some instances, they provide some spatial context like when Curiosity tries to land on Mars. The illustrations lend a hand to create atmosphere, both in the context of the story and for the reader. Some of the text is also placed in unconventional locations on the page, so the text and the illustrations work together to create meaning and story. One finds that the eye is drawn to specific parts of the image on each page, and it is masterfully done.

For these and many other reasons, Curiosity: The Story of a Mars Rover is a great example of modern children’s literature. It is suitable for a variety of ages, and it is worthwhile reading in many ways.

Thomas Pasterfield is a fourth year undergraduate student in Elementary Education at the University of Alberta. His reading interests include fantasy novels, vegetable gardening manuals, and religious books. 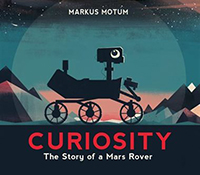