In this poetic and beautifully illustrated book by the Fan Brothers, readers are invited into a young child’s world of imagination. Finn lives by the ocean and on the morning of what would have been his Grandfather’s 90th birthday, he gazes out to the sea and remembers the words of his Grandfather, “It’s a good day for sailing.” As six year olds are apt to do, he begins to build a boat. Finn’s boat is “hard work,” but takes him on a magical and mystical journey.

Finn’s world becomes more fantastical and the illustrations more surreal with each turning page. When he “finally reaches the place of his grandfather’s stories,” there are no longer any words. Instead one enters into a silence and stillness found not only in the depths of the ocean but in space above. The authors reinforce this silence by imposing pictures of noiseless conveyances, such as hot air balloons, zeppelins and ancient ships over the picture of a great blue whale. This wordless portion of the book not only allows the reader to bring their own stories to the pictures, but celebrates the orality of the Grandfather’s stories by not limiting them to a predetermined text.

What Ocean Meets Sky so poignantly depicts is the sadness and loneliness Finn feels at missing his Grandfather. When he states, “I didn’t think the open sea would be so lonely,” one cannot help but be reminded of Max’s similar look of despondency in Where the Wild Things Are, when he sends the wild things to bed, “without any supper.” And like Max, once Finn resolves his inner turmoil, he is able to return home to “a voice calling to him from far away.” He says goodbye to his Grandfather, whose face is superimposed onto the moon. It is a bittersweet illustration, showing Finn’s love in the smallest gesture of a waving hand.

The book is suitable for readers between four and eight years of age. However the story and illustrations have such depth that I would not hesitate to read it with older children or encourage them to explore it on their own. The Fan Brothers are both alumni of the Ontario college of Art and Design and their detailed and enchanting illustrations make the book worthwhile for readers of all ages.

Melinda Cooke has been an elementary school teacher for many years. She loves sharing books with her students and delights in the stories as much as her students. 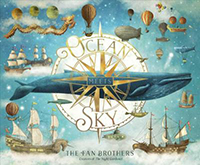