When Paul Met Artie: The Story of Simon and Garfunkel by G. Neri

The legacy of folk-rock duo Paul Simon and Art Garfunkel lives on in When Paul Met Artie: The Story of Simon and Garfunkel, a non-fiction illustrated story/biography. It details the friendship and success shared by two boys from a Jewish neighbourhood in Queens through their passion for music. Opposites in height, confidence, and interests, Paul and Artie are drawn together by each other’s humour, talent, and shared dream of hearing their songs on the radio. This beautiful story celebrates the ups and downs the boys experience through the decades as they draw inspiration from rock legends like Elvis Presley and Chuck Berry, rockabilly pioneers like Gene Vincent and Jerry Lee Lewis, and folk activists like Bob Dylan and Joan Baez.

Written in free-form prose, each spread of this book features one large illustration, each titled with a Simon and Garfunkel song name. David Litchfield’s illustrations are almost animated in nature—they are imaginative, complex, and emotionally evocative in their use of perspective, shadow, and colour to convey a mood. Neri’s words are just as artistic, using adjectives such as “cascading,” “rapturous,” “blistering,” and “crooning” to describe the music experienced and created by Paul and Artie. The prose is rich and descriptive, though perhaps better suited to grade five and older due to the advanced vocabulary and the occasionally mature content.

This story is one that can be shared between adults who grew up alongside Paul and Artie and children who have yet to hear this timeless story about two Jewish boys rising to stardom.

Emma Ferguson is a second-year Master of Library and Information Studies student at the University of Alberta. She is an avid reader when she is not working on school work, and her greatest joys in life include colourful yarn for knitting and weaving, kitschy mugs (preferably full of coffee), and melancholy folk songs. 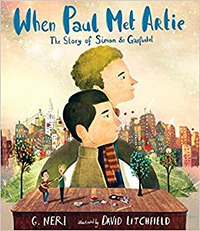