Kiviuq and the Bee Woman by N. McDermott

When we last heard of Kiviuq, he had just survived a harrowing encounter with scary monster mermaids or tuutalik (Deakin Review by Kirk MacLeod). In Kiviuq and the Bee Woman, the grandfather who narrated Kiviuq and the Mermaid continues the bedtime story to his grandchildren. Kiviuq begins paddling home, but comes upon a tent where an old woman invites him to rest and dry his clothing. She turns out to be a giant Bee Woman who wants to cut up Kiviuq and put him in her cooking pot.

For a bedtime story, both the text and the illustrations are quite scary. Illustrator Toma Feizo Gas lets us see into the dark, dramatic and frightening world of the Bee Woman, who is a determined killer. “She shouted, ‘I am Iguttarjuaq, the Bee Woman, and I am going to kill you with my ulu’.”  The accompanying image shows a woman with pointy teeth and insect mouth pincers, who is shaking a sharp ulu (knife) at Kiviuq.

As is the case with many of Inhabit Media’s publications, the reading level is higher than one would expect to find in a picture book. For younger children, this book will need some adult intervention. In addition to the scary content, human skulls talk, the woman eats her own eyelids and “Kiviuq, realized the woman was boiling human meat.” Some of the language is difficult. For example, Kiviuq “fainted” of fright, but “feinted” to get away. McDermott also intersperses many Inuktitut words, which will slow down younger readers. These are defined at the end of the book. 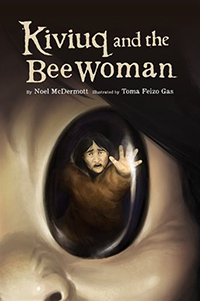