Owls Are Good at Keeping Secrets: An Unusual Alphabet by S. O'Leary

From first to last, the phonic examples in O’Leary’s alphabet book are disarming:

Alligators think you’d like them if you got to know them.”

Unlike so many other authors of this genre, O’Leary rarely struggles to find simple, memorable examples of words that begin with the appropriate vowels and consonants. The sole exception in his work is the use of “Chipmunks” to illustrate the sound of the letter “C.” Child readers would have to be mature enough to recognize the digraph (ch) and be alert to its sound. That exception being noted, all of the other phonic illustrations—even the ones for the “difficult” sounds—are straight-forward, playful and engaging.

Quail get quite tired of being told to be quiet.”

Unicorns believe in themselves.

Yaks giggle at their own jokes.”

Joseph Brant’s illustrations are all that they ought to be: large, clear, colourful and, most importantly in this type of book, unambiguous. His depiction of voles for the letter “V” is particularly endearing. Those of us involved in the field of children’s literature might want this illustration and its motto on our flag:

In any case, we should ensure that this delightful book is on our children’s library shelves.

Leslie Aitken’s long career in librarianship included selection of children’s literature for school, public, special and academic libraries. She was a Curriculum Librarian for the University of Alberta. 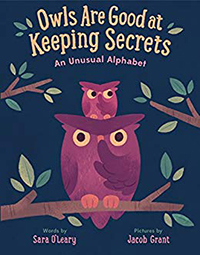