Windy Wyndham and the Wagon Who Couldn’t Swim by P. Gould

This is the sixth volume in Peter Gould’s Stories from the Engine Shed series. These books tell the stories of the train engines and cars of the Bennett Brook Railway at Whiteman Park, near Perth in Western Australia. Apart from being a fun series of children’s books, this series is important because it demonstrates that the concept of anthropomorphized train cars is generic and does not belong to any particular franchise. The series has its own cast of characters and a unique Western Australian world in which they operate. While earlier volumes have been set in Whiteman Park, this is a story told by the large diesel locomotive, Windy Wyndham that harkens back to a time when Windy worked at the harbour in the northwestern Australian coastal town of Wyndham.

The book is full of Donna Franklin’s brightly coloured pictures. The style of illustration varies significantly, even within pictures. Some of the images, particularly those with machines and people, are quite cartoonish. Drawings of people sometimes lack detail. However, when the subject is something in nature, Franklin’s work is stronger. Her rendition of a turtle, a crocodile, magpie-larks and seahorses are lovely.

Each page is a picture with text overprinted. The text includes local references, such as the Freemantle Doctor, the cooling breeze that comes from the Indian Ocean. There are also some railway-specific words, such as “buffer beam”, “shunter”, and “cow catcher.” These words are explained in the glossary, “Ashley’s Railway Words”, at the end of the book.

While not widely distributed, the series is available through the Bennett Brook Railway. This volume includes a loose single page insert that explains the history of the real Windy Wyndham engine, which has been at Whiteman Park since 1984.

Overall, this is an excellent series, which is suitable for elementary school libraries and public libraries. 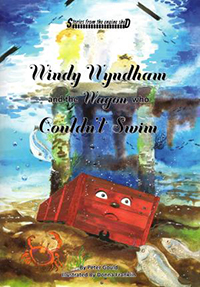