A young school girl begins her day happily by breakfasting with her family, walking to school with her mother, and commencing the normal, pleasant learning activities of her classroom. In an instant, her world changes; she is orphaned and alone in a devastated landscape. War has come; she articulates its reality:

I was ragged, bloody, all alone.”

Simple, forceful, poetic lines such as these carry forward this story of a child refugee. Though it could be read and understood by primary school children, it would resonate with readers young and old alike.

Nicola Davies indicates that her book was inspired by the Guardian newspaper website which featured an account of a refugee child who was refused school entry because there was no chair for her to sit on. In Davies’ own words:

“…hundreds and hundreds of people posted images of empty chairs, with the hashtag #3000 chairs, as symbols of solidarity with children who had lost everything and had no place to go.”

Davies’ interpretation of this reality for young readers is engrossing and moving. Her storyline is perfectly interpreted by the watercolour and graphite pencil illustrations of Rebecca Cobb. Using an expressionistic style, Cobb captures the feelings of confusion and disbelief, abandonment and isolation felt by the displaced child. She also brings a sense of hope to the story’s conclusion.

The teamwork of Davies and Cobb is brilliant. Together, they have created a moving and memorable piece of children’s literature. 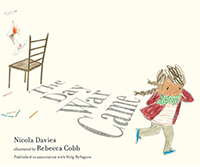