The Muskox and the Caribou by N. Mike

In simple, sensitive, and well-structured prose, Nadia Mike relates the story of a lost muskox calf that is adopted by a female caribou. Her own fawn, like the other newborns in the herd, is short haired, long legged, and agile. The musk ox calf, by comparison, is shaggy, stocky, and stumpy. The herd’s young caribou tend either to ignore or reject him. The doe, however, instinctively protects him until he is mature enough to find his way to a muskox herd.

The story is not sentimentalized; neither is it excessively anthropomorphized. Admittedly, the young caribou “giggle” as the muskox attempts to splash in the pond with them and the little muskox wonders, “Why do they make fun of me?” Anthropomorphizing to this degree seems reasonable in conveying to young children that animals of one species are instinctively cautious, sometimes hostile, toward those of another.

Mike’s storyline is expertly enhanced by the line drawings and delicate colour palette of Tamara Campeau. An experienced wildlife illustrator, Campeau presents a realistic picture of both Canada’s tundra, and the animals which inhabit it in spring and summer.

As well as a heart-warming story, there is an introduction to the natural sciences here, an opportunity to discuss the concept of species, to study a little further our northern ecosystems, and to explore the mothering instinct that leads a female of one species to temporarily adopt the infant(s) of another.

Primary school teachers, school and public librarians, and parents across the nation would find this book an excellent introduction to the nature and culture of Canada’s Arctic. Hats off to Nunavut’s first independent publishing house for this fine piece of children’s literature.

Leslie Aitken’s long career in librarianship involved selection of children’s literature for school, public, special and academic libraries. She was formerly Curriculum Librarian for the University of Alberta. 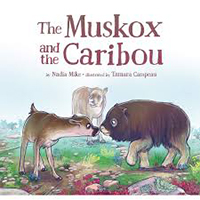