The Case of Windy Lake by M. Hutchinson

Micheal Hutchinson is a citizen of the Misipawistik Cree Nation in the Treaty 5 territory and is no stranger to the Canadian media. He’s worked as a print reporter for The Calgary Straight and Aboriginal Times and became the host of APTN national news. Somehow in his busy life, he has found time to write two amazing children’s books.

The Case of the Missing Auntie is Hutchinson’s second Mighty Muskrat Mystery book. It follows the cousins Chickadee, Otter, Samuel, and Atim (the Mighty Muskrats) of the Windy Lake First Nation. It takes place after the first book, but this time the Muskrats are leaving their reserve to spend time with family in the city.

By setting the book in the city, the topic of urban Indigenous people arises. Hutchinson depicts a wide range of Indigenous people: nurses, students, musicians, and bullies. He doesn’t romanticize Indigenous people, opting to focus on realism and making the characters lifelike. The book makes sure to mention potential issues with moving/travelling from a reserve to a large city such as not fitting in and racism.

The story has the same style as the previous Mighty Muskrat Mystery book with clear goals for the Muskrats to obtain: visit the Exhibition Fair, get Otter a ticket to see the band Wavoka’s Wail, and look for Auntie Charlotte who was taken during the 60’s scoop. One of the best parts is how realistic the story is, not everything goes the Mighty Muskrats way. This isn’t your typical “everything is going to work out just fine” story but that makes it a solid read—they need to come up with a plan B.

It opens a dialogue on residential schools, the 60’s scoop, and the Truth and Reconciliation Commission. It felt like a good introduction to those tough topics, explaining what they are without dismissing them as something that happened a long time ago or minimizing their modern impacts. Instead, the story shows the aftermath, and how it affects the younger generation without limiting characters’ identities to only be their relationship to historical trauma. As such, this book could work as a discussion starter between children and adults on these topics and could be used to promote critical discussion around themes like Indigenous identities and experiences.

Reviewers Biography
Kaia MacLeod, a member of the James Smith Cree Nation, is an MLIS candidate at the University of Alberta. Her bachelor’s degree was in Film Studies, which she sometimes likes to call a degree in “movie watching,” she enjoys exploring how folklore is represented on film and in online content. 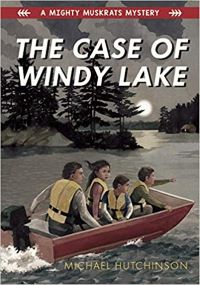