Gabe isn’t sure what happens after he falls off a roof during a storm trying to rescue Miss Cleo’s prize chicken. And he isn’t sure why, when he wakes up in Miss Cleo’s room, no one will speak to him and everyone is crying. But it eventually becomes unignorable: Gabe died in that storm. Well, he almost died. Kim Ventrella’s second novel Bone Hollow, aimed at middle-grade readers, follows Gabe and his loyal dog Ollie as Gabe tries to figure out what happened to him, and what he’s supposed to do now that he’s dead.

After some meanderings between the woods outside his town and the town itself, Gabe meets Wynne, a mysterious girl who shows him her home, the titular Bone Hollow. At the core of the book, Bone Hollow is a misty but cozy refuge from a world Gabe doesn’t fit into anymore. Gabe is searching for a new place to fit in, and Wynne is urgently searching for someone to take her place.

Bone Hollow is a novel that takes its time, dwelling on sensory details that are alternately lush (like Miss Cleo’s sweet-and-savory biscuits) and grotesque (like Ollie’s propensity to lick every bit of Gabe he can find, including inside the wound that killed him). It’s not quite an adventure story, as there is no villain to defeat or ally to rescue. It’s not really a meditation on death; that theme is pervasive, but frequently interrupted. It’s not a gross-out or horror story, as plot threads that move in those directions—e.g., a creepy mortuary owner, and a hollow man with a bird inside his mouth—are abandoned as soon as they are begun. It’s a mix of all these things, in a way that defies expectations.

Bone Hollow suffers somewhat from slow pacing and an unclear plot motivation. The climactic choice that Gabe must eventually make is barely foreshadowed before the halfway mark (although it is spoiled on the book’s dust jacket). Besides this momentous decision, his other movements through the story seem more orchestrated than agential: even after the tornado blows out, Gabe is buffeted around by childhood bullies, scared adults, ghosts, and speeding cars. He reacts to these events with grit, bravery, and no small amount of stubbornness, but he is, predominantly, reacting. Readers who are looking for an atmospheric, creepy, but ultimately reassuring story about loss, change, and finding one’s purpose may appreciate Ventrella’s blend of comforting and unsettling prose. Gabe’s voice is individual, funny, and charmingly Southern—you can tell he’s upset when he starts saying “gosh darn it!”—and his friendships with both his dog and Wynne are carefully traced. Squeamish readers might not appreciate the mild gore—mostly off-screen—and others might simply be put off by the focus on death and dying among humans and animals alike. For those who relish a more morbid take, this book might be a welcome addition.

Amanda Daignault is a PhD Candidate in the Department of English and Film Studies at the University of Alberta. She studies contemporary children's middle-grade fantasy novels, using methods of book history and bibliography to figure out where all those giant trilogies came from and what they're doing. 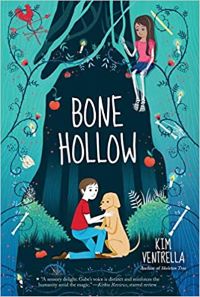