Evidence, Local Context, and the Hierarchy

Director, Centre for Evidence Based Library and Information Practice (C-EBLIP)

2015 Wilson. This is an Open Access article distributed under the terms of the Creative Commons-Attribution-Noncommercial-Share Alike License 4.0 International (http://creativecommons.org/licenses/by-nc-sa/4.0/), which permits unrestricted use, distribution, and reproduction in any medium, provided the original work is properly attributed, not used for commercial purposes, and, if transformed, the resulting work is redistributed under the same or similar license to this one.

A key piece of evidence based library and information practice (EBLIP) is evidence (obviously!). It’s a word that is a bit loaded or has been in the past. What counts as evidence? Does the term “evidence” automatically suggest quantitative research? In early days, as EBLIP emerged from evidence based medicine, some purveyors and users of research evidence privileged quantitative research—hard numbers generalizable across large populations. The research evidence hierarchy was espoused as the model to follow, with randomized controlled trials (RCTs) at the peak, the pinnacle of the pyramid, and case studies often forming the large lower layer or base of the pyramid. In later years, systematic reviews and meta-analyses deposed RCTs from the top of the hierarchy.

The idea of a hierarchy of evidence as Koufogiannakis outlined in 2010 is problematic for various reasons as it pertains to EBLIP. I believe a hierarchy of evidence doesn’t make sense for one particular reason: local context. EBLIP consists of four components that must be present: research evidence, professional expertise and knowledge, user preference, and the local context. Each component should be explored, examined, and acknowledged when approaching a practice problem in an evidence based manner. I suggest envisioning these components as something like Figure 1.

If you do not acknowledge all of the elements, it’s not truly EBLIP, and you won’t have utilized everything at your disposal in order to make a decision or solve a problem. If everything is placed against the backdrop of the local context, as in Figure 1, then how can a hierarchy of evidence be effective? The best systematic review to be found pertaining to your particular question might not be applicable if it does not resonate with the way things are currently configured in your local setting. That’s why critical thinking and critical appraisal of whatever evidence is found is so important to the EBLIP process. 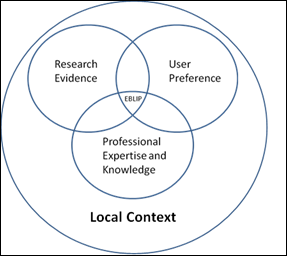 In EBLIP, moving away from the rigid early hierarchy of evidence, the idea of research evidence has broadened to include and value all types of research: qualitative, quantitative, mixed methods, practical, theoretical, participatory—you name it; it’s included. Additionally, evidence arising from professional knowledge and expertise and from user preference has also come to the fore in terms of acceptability. Of course, it must be acceptable if you refer to the Venn diagram in Figure 1.

Research conducted by Koufogiannakis looks at this very issue, and she reveals that librarians are using a wide variety of evidence to inform their practice. Koufogiannakis contends that “the focus of EBLIP over the past 15 years has neglected to incorporate . . . parts of what the movement in fact defines itself to include, namely the user-reported and librarian observed forms of evidence” (2011, p. 42). The evidence used in pursuit of EBLIP when approaching a problem or a decision in practice depends upon the nature of the problem and the question you need to answer. This question arises from where you work, your local setting. If you leave out your own expertise developed over time and the needs, wants, or desires of your users when approaching your question, you’ve left out two-thirds of EBLIP. And then if you apply some kind of arbitrary hierarchy to the research evidence you’ve found, the focus becomes the hierarchy itself rather than the local.

So, if you’re going to look through a lens when practicing EBLIP (and I would argue that lenses are ubiquitous no matter where we go and what we do), choose the local context as your lens. If we can keep the idea front and centre that we must not let our own settings slip out of sight when approaching a practice question, we will realize that the best evidence is the evidence that supports and informs our practice.

Koufogiannakis, D. (2010). The appropriateness of hierarchies. Evidence Based Library and Information Practice 5(3): 1-3. Retrieved from http://ejournals.library.ualberta.ca/index.php/EBLIP/article/view/8853/7348