2016 Nelson. This is an Open Access article distributed under the terms of the Creative Commons‐Attribution‐Noncommercial‐Share Alike License 4.0 International (http://creativecommons.org/licenses/by-nc-sa/4.0/), which permits unrestricted use, distribution, and reproduction in any medium, provided the original work is properly attributed, not used for commercial purposes, and, if transformed, the resulting work is redistributed under the same or similar license to this one.

John Jay College of Criminal Justice is a senior college of the City University of New York (CUNY), serving a student population of approximately 11,000 FTE (full-time equivalent students). While John Jay now offers majors in a variety of fields, traditionally our focus has been on criminal justice, public management, forensic science, and forensic psychology.  Our motto remains “Educating for Justice.” Our students are typical graduates of New York City public schools, who often find the idea of writing a research paper using academic resources to be a challenge. John Jay’s reference librarians aim to help students meet that challenge with library instruction in selected classes (especially first-year writing classes and research methods classes), outreach to faculty, and by providing reference desk service every hour the library is open.  The Lloyd Sealy Library has a print collection selected to meet the needs of an undergraduate population as well as a research-level collection in criminal justice that serves the needs of a doctoral program and researchers around the world. Our online resources are very strong for a public college our size, owing to long-standing cooperative arrangements among CUNY libraries and support from the CUNY central office.

In December 2014, the Library Department Assessment Committee met to review the longitudinal statistics we had been maintaining as part of our participation in both the ACRL annual and ALS biennial library statistics reporting programs. The Library faculty of John Jay College of Criminal Justice have always taken these measures very seriously and been as assiduous as possible about maintaining both accuracy and consistency in counting methods. As a result, we felt we had fairly reliable numbers going back more than 20 years. We met to review these numbers to see what they could reveal about the work we had been doing and where we could improve.

Many of the trends over this 20-24 year period were expected from our knowledge of the history of John Jay College and general library trends: John Jay College’s full time equivalent (FTE) student numbers increased dramatically before leveling off and then dropping slightly; circulation of materials from the general collection declined as electronic journals and e-books became commonplace; both collection and total expenditures increased over time, but decreased when inflation was factored in and even more so on a per student FTE basis. The Library’s gate count numbers, however, were somewhat erratic, most likely fluctuating in response to the use of space elsewhere in the College that resulted in more or less free space for students to study. But the gate counts never showed a serious decline in use and informal observation confirmed that the Library continued to be a popular place for students to study alone or in groups, with students sometimes sitting on the floor at the height of the semester.

The most troubling and glaring trend observed by the Assessment Committee was the long-term, steep decline in the number of reference questions asked. The decline was in absolute numbers, as well as in questions per FTE student (see figure 1). The Sealy Library faculty had often discussed the proper staffing of the Library Reference Desk, prioritizing this service as perhaps the single most important way to help students succeed, but these numbers made us question the wisdom of staff hours devoted to reference service. Experienced reference librarians pointed out that although the questions were fewer in number, they tended to be complicated and required more time to sort through the students’ needs. Still the decline in numbers was so steep and troubling that it became the one statistic the Assessment Committee chose to focus on (see Figure 1). 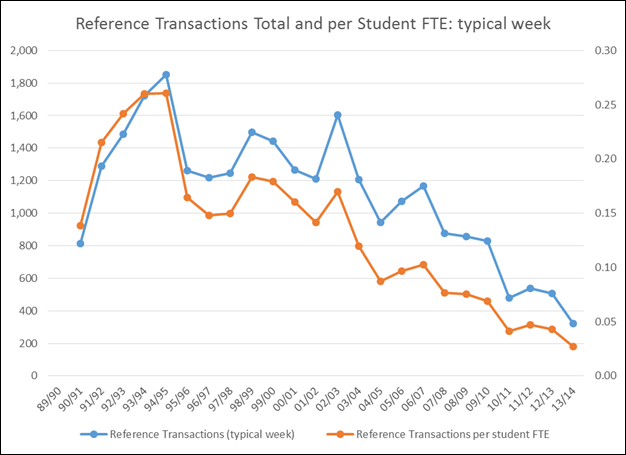 A month-long discussion ensued involving the entire Library Department. Several librarians noted that the library literature indicated that the decline in reference questions was ubiquitous in academic libraries and that recent ethnographic studies had shown students’ reluctance to ask librarians for help. These studies, plus librarians’ own observations, showed that students frequently needed the help of a skilled librarian even when they did not ask. Therefore, we challenged ourselves to increase the number of reference questions answered beginning with the Spring 2015 semester.

Two recent changes in statistics collection made it possible to measure the effectiveness of our efforts. First, after years of relying on a “typical week” mode of counting reference questions, in August 2013 we had switched to a locally-developed, simple means of counting every reference transaction. This was developed primarily as a means to evaluate how fully to staff the reference desk, but it also allowed us to see what kinds of questions we were getting and other trends.

Secondly, in September 2014 we re-instituted a chat reference service using LibraryH3lp (Nub Games https://libraryh3lp.com/). The Sealy Library had previously used QuestionPoint (OCLC http://www.questionpoint.org/), but dropped the service after concluding that it provided insufficient benefits to our students. For the previous few years we had been relying on email reference and infrequently-used texting to service off-campus users. After our disappointment with the earlier chat experience, the new chat service was launched with muted expectations but a desire to provide online reference service to students in John Jay’s first online master’s degree program, which also started in September 2014. We were able to provide the new service during peak hours of reference desk use, from Monday-Thursday, 11:00a.m. – 5:00p.m. We announced the new service in our Library news blog, and added a chat widget to both the Library home page and to the “Ask a Librarian” page. Otherwise we did not publicize the service. LibraryH3lp provides excellent statistics on duration of chat, IP address of questioner, and URL of the page where the chat initiated.

We took several steps to try to encourage the asking of more reference questions.

To increase chat reference, we:

A review of reference statistics at the end of the Spring 2015 semester[i] indicated that our interventions were successful (Table 1).

Without implementing our chat reference service in Fall 2014, total reference questions asked from Fall 2013 to Fall 2014 would have continued their long-term decline; the addition of chat reference reversed that by a very modest .96%. However, we took more aggressive steps for Spring 2016 (discussed above) and the number of reference questions asked increased  by nearly 11% compared to the previous Spring. Even without the chat service, the increase would have been a respectable 5%.

A look at the other statistics we keep indicated that such an unexpected increase in usage was not reflected elsewhere (Figure 2).

From Spring 2014 to Spring 2015 there was actually a small decrease in the number of students at John Jay. There was a sharp decline in the number of library instruction classes taught, the usual driver of students to the reference desk. There was a 5% increase in the number of users passing through our security gates. However, in prior years, when we used the “typical week” method of estimating usage statistics, there was little relationship between gate count and reference questions. In those years gate counts went up and down, but reference questions consistently dropped. Use of our electronic resources, as measured by proxy server connections, showed a much bigger increase in Fall than in Spring. 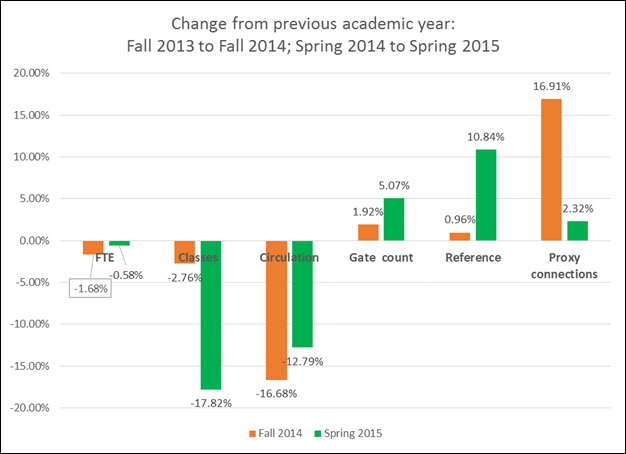 Change in library activity: by Fall and Spring semesters 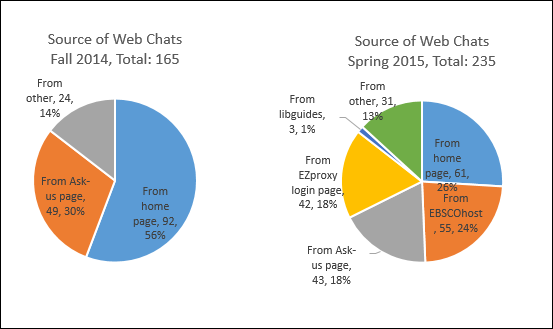 The effectiveness of both our traditional and our chat interventions needed to be examined. The chat question was fairly easily answered by looking at the source of the chats, as shown by our LibraryH3lp logs (Figure 3).

Whereas the source of over half of our web chat sessions in the Fall was our home page, in the Spring, after adding additional chat access points, the home page accounted for only 26% of our chats while 43% of our chats came from these new sources. Also, 13% of our chat sessions came from the hour added between 5:00p.m. and 6:00p.m. It should be noted that we did not do any additional publicizing of the chat service, although word of mouth and repeat users may account for some of the increase. Randomly selected chat transcripts confirmed that the questions coming from EBSCOhost were indeed questions from users confused about how to search for information, or how to interpret what they were finding. This insight, along with the increased usage, confirmed what we believed to be true: that we are improving our services to students by adding our chat widget to all possible locations.

Ironically, in mid-Fall 2015, after this study, we realized that most of the questions coming from the chat widget on the EZproxy login error page were from students incorrectly entering their usernames. We have attempted to revise our login pages to eliminate confusion. If we succeed we will improve service but reduce our chat counts. This is a paradoxical result but a reminder that the numbers we collect can never tell the full story.

Whether or not we were successful in our attempts to increase in-person reference was less clear. A 5% increase in in-person reference questions asked (over the previous Spring) would have been unlikely had it not been for the proactive approach on the part of the librarians, particularly in light of the sharp decrease in library instruction classes. But it was certainly possible that our department-wide discussion of reference statistics resulted in more assiduous recording of the activity, rather than greater efforts to engage our students. To attempt to answer this question, the writer asked all John Jay reference librarians to fill out a simple two-question survey, asking whether they were aware that we were trying to increase the number of reference questions asked and whether they had changed their behavior in any way in order to elicit more questions.

We found that a decrease in the number of reference questions is not inevitable and that both in-person and remote questions will increase if librarians reach out to connect to users where they are, whether sitting in the library being puzzled or working at home with a database they find confusing. This conclusion seems obvious and almost trite, but it was only by looking at the evidence of decreasing reference use that we were motivated to make changes. And, hopefully, seeing how effective these actions have been will encourage us to expand on these changes even further.

[i] All statistical comparisons are Fall to Fall and Spring to Spring, since experience has revealed that library usage changes dramatically every year from the Fall to the Spring semester.